Why hello there! I’m trapped in JFK, having “missed” my flight to Pittsburgh due to a series of clusterfuck conditions at Heathrow and at JFK. I say “missed” as I was actually at my original flight’s gate before it even began boarding, but I’d already been helpfully checked onto the 9 pm flight. And by “helpfully,” I mean I’ve seen better service on Cops, when they run down men wearing their underpants.

Anyway, I’m trying to kill some time by blogging, but realistically that means shite will pour forth from my exhausted brain, onto my laptop, and directly to you! Awesome!

But I really need to pull up my big girl pants and not complain. Up until the horror which has been Delta’s customer service, I’ve had an absolutely amazing trip.

For those of you who haven’t seen my travels with Dr. Ruth, she’s the photographer. Meaning that the night we were in Paris, we have over 200 beautiful photos. For the rest of my trip, when I was on my own? I think I have one fuzzy iPhone photo of an off-center cooked breakfast. Pathetic!

So I hope you enjoy the Paris photos, but I can’t take any credit. They were all Dr. Ruth’s!

Here we are at the EuroStar, waiting for the train. Everyone looks very glamorous! You’ll be seeing this “cafe configuration,” as I like to call it, quite a bit in these photos.

And here we are! On the banks of the Seine. The train ride is ridiculously short, and does not go through Wales. Also, if you ask your Europeans friends (with their much firmer grasp on geography) whether you’ll be going through Wales, they will mock you. From left to right, we have Mrs. Whisky, representing Norway; me, representing either oompah loompahs or the USA, depending on whom I’m standing next to in a photo; Dr. Ruth, representing England and Wales (which you do not go through on the Eurostar), Judith, or Yoooo-deeeee, representing the Netherlands; and Linda, representing both Ireland, and Salim in that one reading my friends did for me. Such pretty ladies!

Here we have another cafe configuration, this one con blankets. I’m practicing my French, which I’m ashamed to say was absolute pants. Apparently, two years of high school french over a decade ago gets you bupkes in the field.

Here we have the ubiquitous “upward photo” shot:

With another at night, just to keep it real:

Keeping in mind that between the five us girls there are about 97 degrees ranging from physics to sexual health, you might wonder what cultural things we got up to. Well, we made Linda act like an Egyptian:

But she wasn’t Egyptian enough for Ruth, who had to intervene:

There may have been some molesting of statuary:

Someone (Dr. Ruth) might have pointed at a fountain and said, “Who wants to pretend she’s peeing!” And someone (Dr. Peeler) might have said, “Me! Me!”:

Obviously, none of these things can be blamed on the drinking of many kir royales and pastises:

Or the two helpings of abused goose I managed to cram into my gob on the first day we were there. Here’s round two. And yes, Mrs. Whisky’s starter featured a shot of vodka. How very Scandinavian!

The steak frites was amazing, and enjoyed by all:

And, admittedly, quite a few croissants were abused in the photographing of this trip:

We did have a few moments of serious contemplation of Paris’s incredible beauty:

And there were a few monuments too large for us to mess with:

But the best part of this trip was being with my beautiful friends, who make me so very, very happy.

Ruth says it all with this lovely smile in front of the Eiffel Tower:

There was much catching up, and gossiping, and sharing. I dont’ know what we were talking about here, but it must have been intense:

I think this looks like a still from a soap opera. Cracks me up! Finally, the whole whirlwind trip can be summed up by these two photos. Now you see it; now you don’t:

Anyway, the trip was gorgeous. We got back to London late evening, and the next morning Ruth and I went for a full English breakfast. Then I went to grab a train up to visit another friend, leaving Ruth to her work week. I had a brilliant time in the frozen North: totally relaxed and louche. We did nothing, which is exactly what I needed. A few wee wanders, much watching of movies in our skivvies, and a few nice meals with lovely conversation. Brilliant!

Then I returned to London, where I had one last meal with Dr. Ruth. This morning, very early, I was up to get to Heathrow. Where Delta commenced screwing me silly. So right now I may smell like a goat, and I’m absolutely dreading the 11:30 pm drive back to Greensburg, but the trip was lovely. I’m so privileged to have such amazing people in my life, and to be able to visit such beautiful cultures. And to eat their food in copious quantities.

And despite sitting in the Sartrean hell which is JFK, I was also very, very thrilled to see some of my favorite book bloggers have made themselves into Peeler’s Cheerleaders. They’re adorable: 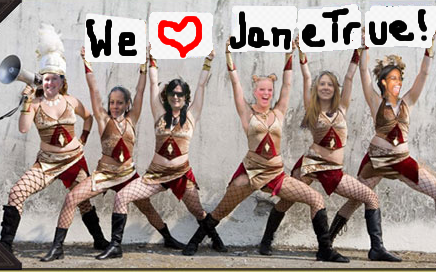 Jessica, aka the SPINECRACKER (rawr!) has a contest to win Tempest Rising attached to the post, as they’ve made it their mission to wrangle me more fans. Which I appreciate very, very much. You girls are lovely, and I’m so glad I get to meet some of you at AAD, and hopefully more of you at RT! I’d give you big sloppy goat kisses but I’m thinking I should just say, “thanks,” and maybe buy you a bevvie.

All right, I am about to melt into some sort of primordial goo, so I’d better sort myself a coffee and a walkabout. Maybe throw a temper tantrum. Or write a strongly worded letter to Delta, using copious amounts of metaphor and simile.

It’s been a long day. See you in a few, after mucho zzzzzzzzzs. Don’t forget you still have time to enter to win the contests on this page. Just scroll down a few entries!