It’s with great pleasure I introduce Mario to the Emporium. He’s fabulous . . . never read an email him with something in your mouth. It willÂ inevitablyÂ come out of your nose. He’s hilarious and the books are fantastic–I love me some Felix. Rawr! So here goes . . . Mario Acevedo!

The Writerâ€™s Life, a Cocktail of Friends and Alcohol.

I first met Nicole Peeler at a clothing-optional writerâ€™s workshop.Â  Afterwards, Nicole told me it was too flaccid.Â  My work, she meant.

My fifth book is out, which means Iâ€™ve been at this writing biz as a professional for four years.Â  We all expect great things from getting published.Â  Piles of money for one.Â  That happens for a few.Â  Other writers fizzle out right away and disappear.Â  The rest of us die-hard scribes slog along as mid-list authors, trying our best to survive.

But what I didnâ€™t expect and what surprised me was meeting and becoming friends with my fellow writers, strangers at first.Â  One popular misconception is that writers are introverted hermits toiling away in an attic or basement.Â  Once in a while theyâ€™re prodded out for book tours and they squint mole-like at the sun before slinking away in search of a drink.

Actually Iâ€™ve found writers to be the opposite.Â  Almost unanimously theyâ€™re gregarious and generous.Â  Most of us realize that our success is a matter of hard work and luck.Â  There are a few writers–insufferable wretches, the toe fungus of the publishing industry–who act as though theyâ€™ve been anointed by a Higher Power to deliver the printed word.Â  Usually these writers blend in with the normal good people but occasionally they give themselves away.Â  When they do, we have a special name for them: microphone hogs.Â  The next time youâ€™re at an authorâ€™s panel and there is one writer who slobbers all over the mike and barely acknowledges the other panelists, that person is the insufferable wretch, a.k.a. the microphone hog, a.k.a. the windbag asshole.

Another popular misconception is that writers are backbiting helots.Â  Again, untrue.Â  We authors band together in online tribes.Â  We watch out for one another; if thereâ€™s an opportunity we pass along a mention.Â  If thereâ€™s a snake in the grass, we shout a warning.Â  This doesnâ€™t mean we donâ€™t talk smack about one another. Â  We do.Â  As much as possible.Â  For example, I know things about Nicole that would make a prison warden blush.Â  And I respect Nicole too much to give details other than to say I have pictures for sale and I accept PayPal.

However, there is one perception about writers that is very true.Â  We like to drink.Â  A lot.Â  My first writersâ€™ conference as a professional was the 2006 Bouchercon in Madison, WI.Â  Voted the most walkable city in America.Â  Which means the bars are within stumbling distance.Â  Because of that experience, Iâ€™ve held mystery writers in awe.Â  My heroes.Â  Since then Iâ€™ve branched out to other genre conferences and while I certainly wouldnâ€™t call fantasy writers lightweights around the bottle, mystery writers remained the grand potentates of partiers. 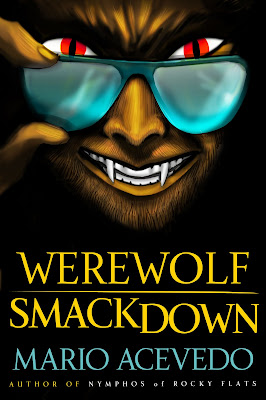 Until my first Romantic Times conference.Â  Who wouldâ€™ve thought these bitchy lushes masquerading as college professors and suburban housewivesÂ couldâ€™ve hip-checked mystery writers off the barstool of honor?Â  To be fair, some of these writers were ringers, mystery authors doing double duty.

One memorable bacchanal was the public reading of sex-drenched pages.Â  Civilians–i.e., non-writers–crept close to soak up the 100 proof filth.Â  Judging by their sweaty faces and twitchy fingers, we didnâ€™t disappoint.

Which brings us full circle to the queen of sweaty faces and twitchy fingers: Nicole Peeler.Â  Buy her book.Â  Support her snark.

His latest book, WEREWOLF SMACKDOWN, is on the prowl.Â  Your best hope for salvation is to buy a copy…or better yet, several.

And now for the CONTEST! To win a copy of Werewolf Smackdown, answer me the following, in comments:

Felix doesn’t consume his blood the “normal” way for a vampire. Rather, his sanguinary consumption often occurs in the form of enchiladas with a very special red sauce. What do YOU think is a good recipe/type of food to serve as a culinary vehicle for blood? Por ejemplo (see Mario! Spanish!), Blood a la Mode! (I’m wikked bilingual people. Wikkid.) Winners will be pulled from the Contest Can next WEDNESDAY, just in time to announce my NEXT CONTEST.