Hi folks! Today we’ve got a special guest, Karen Duvall. Karen and I are agency sisters, we’re both with McIntosh and Otis. Karen was also very kind to me when I was on submission with Tempest Rising, and asking all sorts of silly questions in Absolute Write’s Purgatory. So it’s with great happiness that I host her here, as she debuts her latest urban fantasy novel, Knight’s Curse. Stay tuned for a contest opportunity at the end of this post. 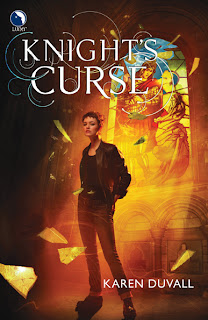 The Versatility of Urban Fantasy

Do you remember the first urban fantasy you ever read? It may not have been labeled urban fantasy at the time, but I bet you liked it. A lot. I know I did. And I wanted to read as much of it as I could get my hands on.

What’s so great about this subgenre of fantasy is that it’s versatile. You get your fairies and elves or your vampires and witches, and you can have your urban setting with all its contemporary trappings, too. Talk about imagination. Wow, there are so many combinations of the weird and wonderful that the possibilities are endless.

This is what drew me to writing the genre. My head is filled with strangeness most of the time anyway, and to pour it into a story within a world of my own making is like paradise for me. Combining real emotions and familiar situations with the fantastic couldn’t be more satisfying.

That’s how Chalice was born.

Chalice is the heroine of KNIGHT’S CURSE, the first book in my urban fantasy trilogy being published by Harlequin Luna. She’s not so magical as she is powerful by virtue of super human senses that enable her to be an awesome thief. Chalice doesn’t even like magic, at least not at first. She’s kidnapped by a sorcerer and forced to steal cursed and charmed artifacts. She’s a different kind of urban fantasy heroine with an unusual sort of problem. She’s bonded to a homicidal gargoyle as a way for her kidnapper to keep her in line. She can be a slave, or she can die. Her choice. And there are times when death seems the better option.

It’s her ancestry that intrigued me when I began writing the first book. The story sprang from Chalice’s heritage and the mythology I created to go with it. She’s descended from an order of female knights who fought in the Crusade Wars of the eleventh century. All the knights had special talents because they were the progeny of angels, and that gave them an edge over the enemy. They kept the knighthood strong over the centuries by mating with their guardian angels to procreate new knights for the order. 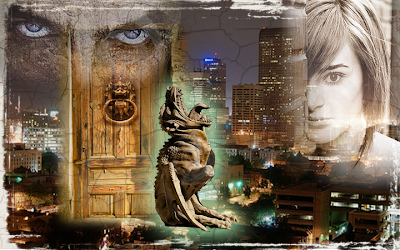 Chalice is adverse to magic because she blames it for everything bad that’s happened in her life, yet she’s forced to confront it every day. Magic is all around her, in nearly everything she touches, even in the man she falls in love with.

I had great fun putting Chalice in harm’s way every chance I got because I knew she would learn from the experience and use it to her advantage. Which she does. The second book explores her knighthood of sisters and the danger that comes close to exterminating them all. The third and final book takes Chalice on a perilous journey that seals a circle of trust, family and love. From the beginning, magic is the constant glue that holds everything together.

If you could create an urban fantasy, or have one custom made just for your reading pleasure, what would make it different from other books on store shelves? How would you make it special?

Thanks Karen! What a great post. And now I’d like to do a contest for Karen. The prize will be any two mass market paperbacks of your choice that are available on Amazon (totaling about $15, or the equivalent in your country’s money). You can enter by answering Karen’s question. You can also earn extra points by reviewing Karen’s debut on your blog, Amazon, Goodreads, etc (one point for each entry); adding Karen on FB and Twitter (one point each);Â  and/or by adding me on FB or Twitter (one point each). Just be sure to add up your entries for me, as i’m no good at math. 😉

The Contest Can will pick a wiener in two weeks, on October 14th, to give you reviewers a chance to read and write. Buen suerte!