First of all, sorry about the title. I have no self control when it comes to anÂ opportunity for aÂ “Who’s Your Daddy?” joke. 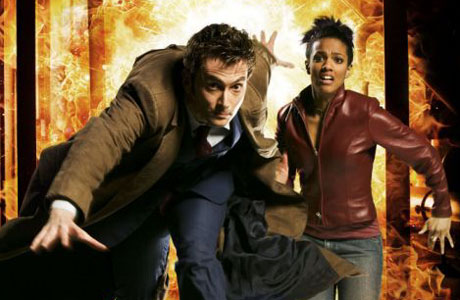 Second of all, Oh dear lawd and lady, I love me some Dr. Who. And yes, I know EVERYONE ELSE has already been loving Dr. Who for years now. And I’m also well aware that it’s completely lame I wasn’t loving him from the start, since I lived in Britain for six years including the years he was resurrected.

But I’m bad about telly (don’t own one now) and have always been rubbish about watching series when they were first aired. I finally got around to watching Dr. Who because I now have Netflix, and I’m trying to “relax” and “not work” for a few hours each day (crazy! I know!). So I started watching.Â And I haven’t been able to stop. Why, you ask?

Because I’m good like that, here are my top five reasons to watch Dr. Who, if you haven’t already:

Could the casting be any more brilliant? Seriously? First of all: the Doctors. Christopher Eccleston is one of my all time favorite baddies (I always had him mentally cast as my character, Jarl). So to cast him as the Doctor? Brilliant! It was so unexpected, and therefore genius. And David Tennant couldn’t be more adorable if you put him in a pink fluffy bunny suit and made him wiggle his nose. And the women! The women! First of all, Billie Piper. She is AS adorable as David Tennant, and should really be wearing a pink, fluffy bunny suit at all times. And I love how she’s adorable but she’s also normal. She’s not a stick insect scary model lady from the bowels of planet Norexia. She’s so lovely, but in such a normal human girl way that she would never be cast in America. And then they had Catherine Tate! THE Catherine Tate! One of the funniest women ever to walk the planet, but, again, not cast simply because her dead, dead eyes are framed by slightly starved symmetry. And I’m just starting Season Three, so I can’t wait to see who comes next.

Until China and/or India usurps the title, it’s tough for Americans to be the superpower. When you’re at the top, a little humility is expected, and Americans are no exception. So we’re taught either to be self-conscious of American patriotism, OR we’re taught to be self-conscious about our self-consciousness regarding patriotism. So one of the things I most enjoyed about living in Britain and that I enjoy about watching Dr. Who is how the show revels in, and reveals, New British Patriotism (pronounced with a long “a,” daaahlings). It’s both fun and enlightening for me to see how the most recent superpower before America has recovered its sense of place in the world. We’re gonna be scrambling to think of something soon, my dears, so we should all watch Dr. Who as a crash course in cultural realignment. And in the meantime:Â God Save the Queen!

It is unapologetic! Nary an episode goes by when someone doesn’t offer themselves up to save their friends, or simply for the greater good. People die right and left in this show, but only after we’ve come to really know and like them. Then some monster comes along and is all, “I’m gonna destroy the Earth! Because I’m a MONSTAH!” and the doctor is all, “Dude, I need more time to jimmy-jack some shit with my Sonic Screwdriver!” and the person we just came to know and love is all, “I will make a stand in order to buy you enough time for your jimmy-jacking of your shit! And I will die terribly doing so!” And then they DIE! For real! Okay, not always for real. Sometimes, if they are extra sexy-spicy (Captain Jack! Captain Jack!) they are brought back in all their omnivorously sexual glory. But usually they are really dead! REALLY dead! In the meantime, I think that shows a hell of a lot of chutzpah on the part of the writers of Dr. Who. Heroism is so nineteenth-century, and here we are in the Noughties! Maybe we’re getting into a cycle of retro-heroism? Or maybe the writers just know we all need a little hope, as a species. Which leads me to . . .

I could write a million things under Number 2 (snicker) but I’m going to focus on just one: I love how this shows plays with the expected Sci-Fi trope of Bad Humanity. Most current Sci-Fi seem to have acceptedÂ that, as a species, we are all a bunch of fuck ups. TakeÂ Avatar, for instance. You have toÂ stop being human, in that film, to be worth anything. But not in Dr. Who! Dr. Who is constantly excited about humanity. In the Doctor’s estimation, what makes us so stupid makes us so great, and vice versa. We’re not simply damned, corrupted humanity. Instead, humanity is shown in all it’s ridiculous, divine,Â complicated glory: as capable of greatness as we are greatly capable of pig-headed acts of purely narcissistic self-destruction. So yay for Â humanity! It’s AMAZING. When Americans remake shows from the seventies (BSG!), we’re all, “Obviously we’re not going to use that CRAZY SEVENTIES SHIT they came up with back then. We’re gonna soup everything up and make it look modern! POST-modern, even!” But not Dr. Who! The Daleks still look a bit like the Jetson’s maid. If an American studio were behind the show, they would have been upgraded to look like the Jetson’s maid, if she had been designed by Dyson. That robot would clean the fuck out of your house–serious, black hole suckage, people. Not Dr. Who, however! The old enemies haven’t changed all that much, leaving all the fancy-schmancy computer graphics for the new enemies. And the Doctor, himself, hasn’t changed his old ways. When he builds stuff, it still looks like it was built with the contents of an Antiques Roadshow: Bakelite Edition. It’s amazing, and I like to imagine that the show’s aesthetic is a bit like what you’d get if Graceland were a spaceship. A thought that makes me happy, on about four-hundred levels.

So these are just some of the reasons I love Dr. Who. Oh yes, my friends, it is wicked nerdy. But so fun, so joyous, and so smart! Do check it out if you have a spare hour or two . . . I guarantee, you will be hooked.