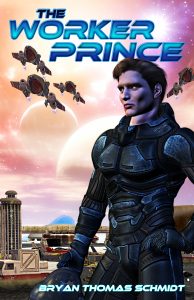 Thanks to Nicole for the invite to visit her blog on my tour. Tomorrow I stop at www.graspingforthewind.com. But today, I wanted to sit down with one of my characters, the deposed High Lord Counselor of the Boralian Alliance, Lord Xalivar, for a chat.

BTS: Sorry. So Mr., Xalivar should I call you?

X: Yes, that’s what my enemies said and now they’ve written that scandalous tome of lies about me.

BTS: Well, I wrote it, actually, just as they told it to me.

X: So youâ€™re a co-conspirator! Why should I trust you?

BTS: Well, I really did want to get it right, so if thereâ€™s something youâ€™d like to set the record straight about, Iâ€™m listening.

X: I thought you said you were listening.

X: No, youâ€™re not. Youâ€™re interrupting. Itâ€™s not the same thing. I am the High Lord Councilor of the Borali Alliance. Interrupting me is tantamount to treason!

BTS: Actually, you were deposed…

X: My family served the Alliance for generations. With honor! We have always done what was best for the Alliance and her people.

BTS: Some would argue with that.

X: Because theyâ€™re fools! Fools who donâ€™t know whatâ€™s best for them. Thatâ€™s why they need leadership. Wise leadership, like I have always provided.

X: Stop interrupting or my LSP men will arrest you.

X: (laughs) No, you donâ€™t. Anyway, as I was saying, the accusations made against me were made of ignorance, from a total lack of perspective.

X: Lies! Why are you spreading them? I already told you these were lies.

BTS: But the existence of slavery is documentedâ€”

X: Yes, but I did not enslave them. My grandfather did. I merely preserved the system. It was working just fine for both of our peoples.

X: Slaves always do, but they are not intellectually capable of making such statements with any accuracy.

X: Thatâ€™s your opinion. Not a fact.

BTS: But they came from Earth to colonize the stars just as your ancestors did.

X: Earth has many species.

BTS: But only one species of humanoidsâ€”humans themselves.

X: Evolved from apes. Some of us evolved longer and more advanced than others.

BTS: So there are levels of evolution?

X: There are levels to everything. Itâ€™s the natural order of things.

BTS: The Vertullians donâ€™t believe in Evolutionary theory. They believe in creation by their God.

X: See? They havenâ€™t intellectually evolved enough to understand Evolution. And here you and everyone else go writing their story as if itâ€™s history, as if itâ€™s truth. Itâ€™s a total sham! Slander! I should sue you all!

BTS: They just wanted the same rights as your own people. Is that so bad?

X: You have to earn rights. They are not inherent.

BTS: I see. Anything else?

X: I did not betray the Council. The Council listened to lies told them by my sister.

BTS: I heard you two were very close.

X: (laughs) I thought so once. I was wrong. Itâ€™s clear our family had some weak genes which she was victim of.

BTS: So sheâ€™s not evolved?

X: Sheâ€™s lesser evolved than I am, yes.

BTS: Wow. Ok. And Davi Rhii? He was raised as your nephew and heir, yet you betrayed him.

X: I did not. He betrayed himself. He set out to destroy our superior Alliance and was revealed in his ignorance.

BTS: You didnâ€™t send men to kill him?

X: I did not. And I never abused the slaves. They were treated as slaves deserveâ€”like property, herded and directed, incapable of making proper decisions on their own and born to serve their masters. Itâ€™s natural, not abuse.

X: Itâ€™s a matter of perspective. Creatures of their level of low intellectual ability are prone to exaggerating because they donâ€™t fully grasp reality.

BTS: But the Council and many of your citizens agreed with them?

BTS: So anyone who disagrees with you is less intellectually developed?

X: Isnâ€™t that obvious? They replaced me with one of their own, tried to arrest me. They criminalized me by slandering my reputation. Itâ€™s all a manipulation and distortion by inferior minds.

X: Only intellectually underdeveloped persons would think so.

X: I have not even begun to give you the correct story.

BTS: You believe Iâ€™m too intellectually inferior to understand it.

X: Ah ha! Youâ€™re on their side, despite your earlier denials.

BTS: I tried to be a neutral third party but they seem more credible.

BTS: I have a headache.

X: Iâ€™ve worn out your inferior brain. Told you!

BTS: Thank you very much for your time.

Tomorrow The Worker Prince blog tour continues at www.graspingforthewind.com. A list of tour stops can be found at: http://bryanthomasschmidt.net/2011/09/15/the-worker-priâ€¦e-introduction

Bryan Thomas Schmidt is the author of the forthcoming space opera novel The Worker Prince, launching at Conclave, the collection The North Star Serial, and has several short stories forthcoming in anthologies and magazines. Heâ€™s also the host of Science Fiction and Fantasy Writerâ€™s Chat every Wednesday at 9 pm EST on Twitter, where he interviews people like Mike Resnick, AC Crispin, Kevin J. Anderson and Kristine Kathryn Rusch. He can be found online as @BryanThomasS on Twitter or via his website. Excerpts from The Worker Prince can be found on his blog.

Xalivar Rhii, once the High Lord Counselor of the Boralian Alliance, the continuation of an honorable line of fine leadership, now spends his days fighting to redress the injustice done to him by others. An innocent victim, he and his minions hang at their favorite secret hideaway preparing to enact revenge with great vengeance and restore balance to the Universe.