Now that I have strengthened my wrists by giving my professional pimp smack to Dakota Cassidy’s oeuvre, I am going to turn my palm of pimpage over to . . . Mark Henry!

For today, Mark’s first book, Happy Hour of the Damned, comes out in mass market paperback, to stores everywhere: 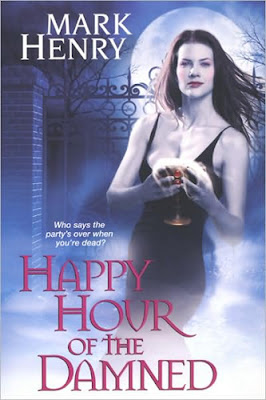 And I highly, highly recommend that you buy it, people. Here’s why:

A) I love Mark! He’s not only one of the wittiest, snarkiest, smartest men I know, he’s also one of the kindest. Believe it or not, snark and sensitivity can go together. So Mark’s a stand up guy, who does a LOT of the work for the League site AND lets me follow him around conventions when I’m feeling like I really can’t socialize with people in Spock ears anymore.

B) I love Mark’s books! More important, really, than Mark being a great guy is the fact that Mark writes great books. Mark could be a complete douche and I would still read his novels, because they’re AWESOME. I am now going to further bullet point this post so that I can outline Why Mark’s Books Are Awesome:

I’ll stop bullet pointing now. The whole point of this post is that if you’re looking for a new series that is as smart as it is fun, Mark Henry’s for you. And now he’s released in mass market, which means not only a cheap price but an easier book to hold. You can read it one handed! What you do with that other hand is entirely up to you. But I wouldn’t recommend you take any tips from Amanda and experiment with Icy Hot . . . Really, Mark, Icy Hot? I’m still cringing.

Curious? Then go forth and buy people . . . Amanda Feral needs you!